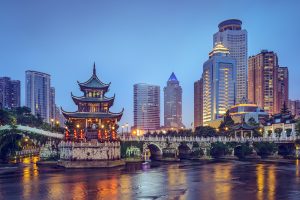 “Made in China” is as familiar a phrase as you could imagine, and why not, with a vast array of products made in Chinese factories and shipped around the world each year. But, while Chinese companies are adept at producing products ranging from 10-cent knick-knacks to high-quality electronics for established brand names in America and Europe, they have, so far, been unable to develop brands with global reach.

What’s the best-known Chinese-owned brand in the United States today? Arguably it’s Lenovo, the computer company. But Lenovo became known globally by forming a joint venture with IBM, which essentially sold their PC business to them, and has helped them market former IBM brands like ThinkPad in the U.S. and other countries.

Haier may be a better example, since it has grown from a regional refrigerator company in China to an internationally-known brand of appliances and smart phones. They recently made a big move toward brand building by acquiring the GE appliance business for a mere $5.6 billion. That’s a lot of cash for a very big brand. But, like Lenovo, they bought it; they didn’t build it.

Other brands like TCL (televisions), Huawei (electronics), and BYD (cars) have significant sales in China and some other countries, but virtually no brand name recognition in the world’s largest market, the U.S.

Ever wonder why there are so few Chinese-owned brands succeeding in the U.S.?

And, by that, I mean the kryptonite of brand: trying to succeed by duplicating what others are doing and selling it for less. The dark side of this, of course, is the rampant product counterfeiting that goes on in China and other countries. But I’m referring to the concept of trying to be about as good as another product and thinking that offering a better deal will be enough to grow a business.

Being a “me-too” brand hurts a company in two ways. First, copycat brands don’t innovate, so they are always playing catch up, trying to match this feature or that add-on and scrambling each time a true advance hits the market. But second, and more importantly, a me-too brand will always struggle to build an emotional connection with its customers and, subsequently, the much-needed brand loyalty that sustains a brand over time.

Apple may be the perfect illustration of this principle because they are virtually impossible to copy. Most of Apple’s products are made in China. They are high- quality, amazing devices. But it’s Apple’s brand that makes them valuable. Their brand holds the promise of continually innovative products that are simple to use and help their users be creative and enjoy their lives. No one can copy that just by making a cheaper version of the same hardware. Look at the brands that are competing with Apple and having some success, like Samsung. They, too, provide innovation (and make their phones in China), though they lack the sky-high levels of brand loyalty that Apple has built in the last two decades.

While China has proven that they can make almost anything cost effectively, they have yet to build a global brand from scratch. Buying other brands is certainly one way to grow a business. But moving past the me-too approach to one based on creating something unique is how all brands ultimately succeed.