Home > Services > Articles & White Papers > Does your brand have to have a slogan? Yes, no, and maybe. 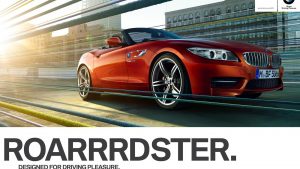 Apple, Whole Foods, and Starbucks don’t have one. Subaru has one but doesn’t emphasize it. Coke changes theirs every few years. And Nationwide and BMW haven’t changed theirs in more then 40 years.

I’m referring, of course, to taglines—or slogans. The big question is: Does a company or a brand have to have a slogan? The answer is … complicated.

Every marketer dreams of that killer tagline, one that customers can bring to mind, or even better, one that becomes such a part of our culture that it is imitated, parodied, and sometimes blatantly stolen (“Got Milk” anyone?) Yet perhaps the biggest status symbol is the brand that doesn’t have a tagline and doesn’t really need one.

Slogans have been part of branding since marketing and advertising were invented. Using a handful of words (the fewer the better in most cases) to sum up a key differentiator works as a kind of shorthand for the customer to form an opinion about a brand. Slogans are also different from descriptor lines, which usually indicate a business or service category but make no claims or promises (i.e. Hellman’s “Real Mayonnaise.”)

A slogan for a brand may start by simply stating a clear point of difference. When Miller Lite was introduced, it was not the first light beer on the market. But Miller was the first to make a lighter version of an established brand and used a now famous tagline to do it, “Tastes great. Less filling.” That tagline was a clever way of saying “fewer calories” while promising no flavor was lost.

A subsequent tagline, “Everything you’ve always wanted in a beer and less,” was the next evolution. Fast forward 45 years to present day and Miller Lite’s slogan has advanced to a far more subjective one that makes more of an emotional appeal: “Hold True.” This one harkens to their roots as a pioneer of the light beer category as proof of the quality and legacy of their beer.

“Hold True” is in the same category of tagline as “Just do it,” though the former has yet to prove it has the staying power of Nike’s legendary line. (I’ll bet a case of Bud Light that it never will.) Lines like these seek to connect with customers’ self-esteem by hoping they will see themselves as loyal in the case of Hold True, or as doers or competitors in the case of Nike. These are both emotions that can create connections to a brand given enough time and exposure to the concept.

Of course, there are taglines that are a waste of ink and pixels. Brands that use lines like “Since 1912” should rethink their selling proposition immediately. No one, and I mean no one, makes a buying decision about products based on how old the company is that provides it. Would you buy a Honda because it’s older than Toyota? No. (They’re the same age, by the way.)

Another common tagline is “The brand you can trust” or “We provide solutions.” Here’s the thing: All brands are about trust. That’s what a brand is. All companies provide solutions or they wouldn’t be in business. So, please, just don’t even bother with taglines that promise the obvious.

So do you have to have a tagline? No. But most strong brands have had good ones in their history, even if, like Apple, they no longer need one.