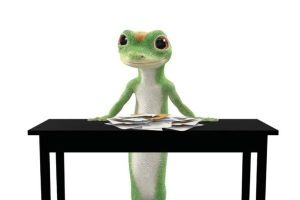 When GEICO introduced the gecko mascot with a British accent in 1999, they fired off the first jokes of what has become an all-out battle to build insurance brand preference using humor as a main ingredient. As GEICO grew, it ran first one, then two, then as many as three different ad campaigns at once and has successfully drilled home their message of “15 minutes can save you 15 percent…” well, you know. Many of their campaigns have become advertising lore, with the gecko, the sensitive caveman, and a camel celebrating Wednesday as a few all-time favorites.

GECIO has grown their brand impressively in this time going from just under $5 billion in revenue in 1999 to over $25 billion by 2017. As GECIO has closed in on their largest competition, State Farm, Allstate, Progressive, Farmers, Liberty Mutual and, even Nationwide have all responded with laugh fests of their own. And while GECIO remains the undisputed king of insurance comedy, their competitors have begun closing the gap. Here’s my take on where most of these brands rate on the Insurance Yuks Scale of one to five stars: 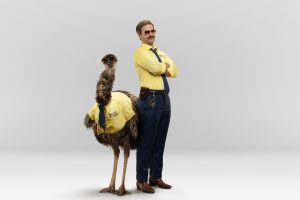 Liberty Mutual: Ok, guys, what’s with the emu? Quirky? Yes. Funny? Not very. The bird and his somewhat nerdy handler are provoking quizzical looks, even from the people in the ads with them. Some other spots feature over-the-top characters  (a biker rider with gigantic calf muscles is one) standing in front of the Statue of Liberty that is kinda, sorta funny. Rating: Two stars.

Allstate still runs occasional down-to-earth spots with Dennis Haysbert, their deep- voiced pitchman since 2003. But beginning in 2010, the brilliantly funny character known as Mayhem has stolen the spotlight. He’s the embodiment of why you should buy insurance in the first place, yet his hilarious slapstick has us rooting for him to survive and wreak more havoc. In the race to be GEICO funny, this could be the best sustained effort. Rating 4.5 stars. 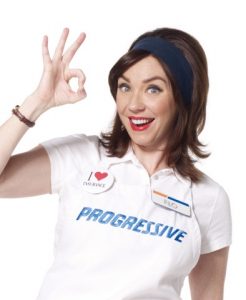 Progressive: You got to admit, Stephanie Courtney, the actress who plays Flo (and sometimes other roles in the same spot), is talented and versatile. Since she first portrayed the slightly too enthusiastic insurance rep in 2008, the cast of other characters has grown around her into a family of oddballs in aprons. The spots are usually funny but often get away from their core promise of comparing premiums. Rating; Three stars.

Farmers Insurance: Oscar winning J.K. Simmons plays Professor Nathaniel Burke in a series of quirky insurance claims based on real events. Burke never cracks a smile as he matter-of-factly explains strange claims. The humor is subtle but the examples are a bit like the Mayhem spots—they make a point about the need for coverage. Not the funniest, but at least on message. Rating: three stars.

Nationwide: Even the staid insurance brand with the long running slogan “Nationwide is on your side” has ventured into humor with series of spots featuring Peyton Manning, their long time spokesman, opposite country music’s Brad Paisley, They raise a few laughs, but rely mostly on their star power for impact. Manning is easily the most marketable NFL player in the last 20 years. Paisley has broad appeal as well. The spots are mildly funny, but they work. Rating: two stars. (No pun intended.)

GEICO started the funny, but the rest of the big brands have turned insurance marketing into a comedy     festival. And some are laughing their way to the top.