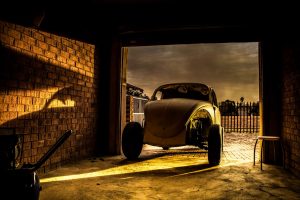 The first Volkswagen Beetles hit the U.S. market in the early ‘50s, and ten years later they were selling hundreds of thousands a year. Sales peaked at 420,000 in 1968, the same year the Disney movie “The Love Bug” debuted. Designed by Ferdinand Porsche (Yes, that Porsche) it was everything American cars were not—rear engine, air-cooled, no flashy fins or chrome plating and much less expensive. One of the most classic print ads of all time provided an elegant two-word summation of the brand with a black and white shot of a Beetle from a distance. It read: “Think small.”

But while the car itself was diminutive, its brand was not. It was essentially the UnCola of automobiles, and its marketing continually reinforced a brand that was all about eschewing gas guzzling domestic cruisers for economical, easy-to-maintain Beetles. It was quickly nicknamed the “Bug” and appealed to both the practical-minded consumer and the countercultural crowd who saw themselves as shrewd car buyers. The brand boasted of being ugly, touted its mileage and resale value, and even embraced the Beetle jokes that sprang up around the brand.

But by the early ‘70s, competition arrived from Japan with both Honda and Toyota introducing small car options including the Civic and the Corolla. VW introduced the Super Beetle with more power and a tad more styling, but it was gradually losing both its lead as an economical option and its luster as a cultural icon. In 1979, VW discontinued sales of the Bug in the United States, although it continued to produce Beetles and sold them in select markets around the world, including Brazil and Europe.

Nearly two decades had passed when VW introduced the New Beetle into the U.S. market in 1998 with familiar styling, but more conventional mechanics. As a front engine, front-wheel drive car, it was no different from most other small cars, except now it was one of the most expensive in the market rather than one of the least costly. Their brand managers attempted to capture the irreverence of the original brand with marketing headlines like “Zero to sixty? Yes.”

Initial sales were strong. But while VW could present a new car under an old brand name, this time around the market was far different and more competitive than in the ‘60s. About 1.7 million New Beetles were sold worldwide in the next 20 years (compared to more than 21 million of the original Beetles), and in 2018 only 14,000 were sold in the U.S. With sputtering sales, VW announced last fall that the Beetle would cease production in summer of 2019.

While classic car reintroductions like the Ford Mustang, Chevy Camaro and Dodge Challenger have all had moderate success, the VW failed to catch lightning in a bottle for the second time. Perhaps the reason, though, was a failure to adapt the brand to the market without losing its essence. The Mustang, Camaro and Challenger all held to their roots as muscle cars, but the New Beetle was far more pricy than its predecessor and one of the most expensive options in its category of subcompact cars. In reality, the New Beetle may have run out of gas because it was a mere visual imitation of the original brand and lacked much of the original brand’s panache. It was a Beetle, but it wasn’t a Bug.