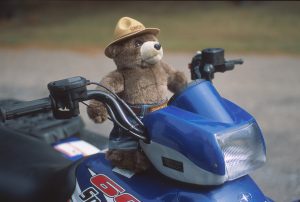 In 1944, the U.S. Forest Service introduced a new mascot for the prevention of forest fires. His name was Smokey Bear, and he was usually depicted as standing upright in a pair of jeans and Forest Service hat. He was frequently depicted carrying a shovel. Smokey was designed to appeal to both children and adults and is currently the longest running PSA campaign in the country.

His tagline has evolved a bit over three quarters of a century as you might expect. It was originally “Remember—Only you can prevent forest fires.” Later on, “Remember” was dropped as unnecessary, and in 2001, “forest fires” was changed to “wildfires.” Yet over more than seven decades and partly due to a song and some 1950s radio PSAs, Smokey is often referred to as Smokey “the” Bear. His real name is just Smokey Bear. 75 years old and people still get his name wrong. At least his message is getting through.

Which begs the question: Does it matter if people mispronounce a brand name as long as they still have strong awareness of it?

Ask Porsche (It’s por-sha, not porsh). Or ask Hyundai. (Rhymes with Sunday, as they once pointed out in their TV spots.) Both these global brands have made their mark in the U.S., despite being frequently mispronounced. Yet imagine how many times they have tried to correct their customers, or worse, their prospects on how to say their brand name. It takes valuable time and attention away from other messages. Still, perhaps in some ways, it forces attention to the brand name as well.

It can get more complicated when a brand decides on its own to change the pronunciation. Nikon cameras is pronounced Nee-kon” in Japanese, but uses a long “i” in the U.S. But Nissan cars does not change its pronunciation. (It’s “Nee-san” in both the U.S. and Japan.)

What’s common to all these examples (except Smokey Bear) is that the brands originated in other countries and expanded to the U.S. market. Domestically, even Nike had confusion initially and was frequently said in way that rhymes with “bike.” Luckily, these brands all have large advertising budgets that can steadily reinforce the correct (or preferred) pronunciation of their brand name.

But what about smaller or fledgling brands without deep pockets and marketing armies? Basically, it’s a big risk to use a name that may cause confusion or require excessive explanation. This can especially come into play when a brand tries to get creative with the spelling of a familiar word.

This is not to say that brand names shouldn’t be creative or unique. Chick-fil-A made it work. So did Froot Loops. (Again with big ad budgets.) But be careful not to use a one-of-a-kind spelling that is easily misunderstood or mispronounced. The first reaction of a potential customer may be to dismiss the brand because it’s hard to understand, rather than be engaged by the unique spelling.

Porsche and Hyundai have reason for a little confusion. Some brands bring misunderstandings upon themselves. But after 75 years, Smokey Bear deserves to be known by his proper name.