Home > Services > Articles & White Papers > When launching a new brand, be sure you’re ready to tell a good story 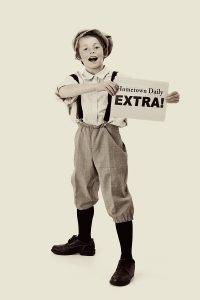 Human beings love a good story. In fact, we live for them. Every day, we listen to and tell a never-ending series of stories from the most mundane, “I found a five-dollar bill today,” to the most dramatic, “you’ll never guess who’s pregnant!” And, while a few of the best stories can be told over and over, for the most part, we crave what’s new. We want to know the latest, the freshest, the never-told-before-now stories. This is why some of the most popular programming on TV is called simply “The News.” And also why it’s on at 5 a.m., 6 a.m., 12 p.m., 5 p.m., 6 p.m., 7 p.m., 10 p.m., 11… We can’t get enough of it.

News professionals are adept at summarizing a typical story in 90 seconds, a few hundred words, or sometimes a mere 140-character tweet. They gather the facts, put them in relevant terms and report it out to their audiences who wait breathlessly for the next tidbit. We have specialty news programs and publications like sports, business, entertainment and politics. There is a huge media jungle looking for the latest big thing and an even bigger audience of consumers logged into their Facebook accounts and just waiting to pass on today’s news.

But, here’s the catch, there are no do-overs. Most stories are only worth telling once. That’s why the professionals work hard to get it right the first time. It’s the same reason you can’t re-tell a joke when you forget a key part of the setup. It’s once and done. Ha ha, very funny. Time to move on.

If only more brands would realize this when they launch a new product, or rebrand, they might experience more success in the long-run. Like the news, brands only get a short time to be truly new. A new business, or a new product or service, must think very carefully how to ride the brief wave of interest in a new launch. Here are a few tips on the right ways and the wrong ways to go about a new brand or rebrand launch:

Be ready—be sure you have the full story ready to tell about why you have created this new brand, what is special about it and where you intend to take it. Brands that launch claiming three new features “and more to come” are not ready. The world will want to know what “more to come” means and, without an answer, will turn to a new subject (not your brand’s).

Have enough substance—a few years ago, the clothing retailer GAP launched a new logo, but that was pretty much it. It wasn’t tied to a new retail strategy or a shift in its branding. It was just a new logo. And with no story behind the change, it was quickly criticized and withdrawn just four days later by their management, which tried to pass it off as “market research.” Sure, I’ll buy that. After all, they learned a lot about what not to do.

Keep a lid on it—the worst way to launch is to have news leak out ahead of your planned introduction. This happened to Microsoft in 2014, when their rebranding plans for recently-acquired Nokia escaped to the Interweb. This effectively undercut their plans to phase out Nokia gradually, and forced them into a defensive discussion of their brand strategy. So, don’t let the word get out, which, of course, is easier said than done.

You’ll only get one chance to be truly new with your brand launch. Be sure to make it newsworthy.