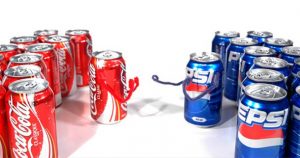 What’s the difference between Coke and Pepsi? Both are cola-based soft drinks. They have about the same amount of sugar in a serving. While brand loyalists for either one will claim there is a big difference, they taste enough like each other that even the CEO of Pepsi once chose Coke in a blind tasting event.

Coke does have wider distribution and is helped along by the Pepsi parent company’s ownership of some restaurant brands, which causes other restaurants chains to avoid offering Pepsi soft drinks. Beverage Digest estimates that regular Coke maintains about 18 percent market share, while regular Pepsi hovers at eight to nine percent.

But first and foremost, the difference between Coke and Pepsi is the brand. Coke, with one notable hiccup (New Coke), has kept its brand focused on the same concept for nearly 50 years, while Pepsi has been shifting and jabbing, finding a little success, but never able to sustain its gains for long.

Which is what a challenger brand often must do as it seeks to gain traction. Coke states on its website that “our central promise at The Coca-Cola Company is to refresh the world in mind, body, and spirit, and inspire moments of optimism.”

Back in 1971, Coke created one of the most famous TV commercials of all time, incorporating the song “I’d like to teach the world to sing,” which ended with one of Coke’s longest running taglines, “It’s the Real Thing.” Fast-forward to today, where Coke’s slogan is “Open Happiness” and you can get a sense of the brand’s continuity over time.

Meanwhile, Pepsi is continually trying new approaches and appeals. In the 1960s, Pepsi gained some ground with the “Pepsi Generation,” a clever attempt to target younger cola drinkers looking to distinguish themselves from older demographics (a.k.a., their parents). In 1975, the company introduced the Pepsi Challenge, a blind taste test that some pundits have suggested favored Pepsi because it is slightly sweeter. Again Pepsi gained some ground but had trouble sustaining it, though the concept of the Pepsi Challenge was never really retired.

In 2003, Pepsi came out with an ill-fated tagline, “Pepsi. It’s the cola.” If you can’t remember this campaign, in which Pepsi is essentially trying to claim it owns the category, it’s because the cola-buying public pretty much rejected it. As comedian Gary Gulman quipped, “If I get a message from ‘The Cola,’ I’m calling back Coke.”

In early 2018, Pepsi introduced a new attempt to shape its brand with the Pepsi Generations campaign, which looks back at several of its most famous pop-star spokespeople, including Ray Charles, Michael Jackson, and Britney Spears.

The irony of this campaign may be that while the original targets of “The Pepsi Generation” are long since grown up, the new Generations campaign may actually be targeting some of the same people, just much later in life.

With yet another new shift of the brand, Pepsi keeps swinging away at the heavyweight champ, Coke, sometimes gaining a bit of market share, often losing it back again. Coke stays the course with its brand message, knowing that servers all around the around the world are apologizing for not having Coke when they ask “Is Pepsi OK?” Unfortunately for Pepsi, too often the answer is no.