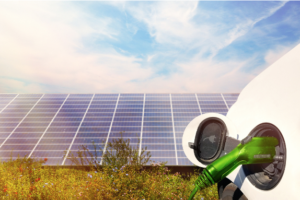 Joost de Vries, is the CEO of DeLorean Motor Company, yes, that DeLorean Motor Company, the one whose original model was most famous for its role in the movie Back to the Future, and for going bankrupt after producing just 8,000 cars. De Vries is leading the charge to re-enter the automobile marketplace with an all-electric version of the long dormant brand dubbed the Alpha5. It resembles the original DeLorean the way Danny DeVito resembles Brad Pitt—from a distance. Both cars have gullwing doors and four wheels, but the concept versions of the Alpha5 are far more sleek and stylish. But they are still just that—concept cars.

The DeLorean website describes this brand evolution by saying, “The DMC-12 [the original DeLorean model] was never meant to be a static interpretation of the brand, the brand would constantly evolve. Our icons are reimagined. DMC is and always was in constant evolution. An icon is validated over time but to constantly reimagine mobility allows new icons to come into existence.”

This is a fairly defensive way of saying, “We decided to try again.” And there’s nothing wrong with that. Launching a new electric car brand is challenging enough, but using the DeLorean brand gives the company instant brand recognition, even if it is 40 years since the last DeLorean rolled off the assembly line. So de Vries and DeLorean have a vision, they have a concept car design and they have the DeLorean brand, but so far that brand may be the most tangible thing they have. If only we had a time machine to see what will happen next . . .

Meanwhile, General Motors is in the latter stages of reviving a far more familiar brand as an electric vehicle—the Hummer. Hummer dealerships closed in 2009 and at one point GM had a deal in place to sell the brand inspired by beefy U.S. military vehicles to a Chinese company. But the deal was never completed, and GM parked the Hummer brand next to Pontiac and Oldsmobile and let it collect dust. As automakers all chase the electric car market like it was gold rush, GM is relaunching the Hummer as a GMC model in both a pickup and SUV design. These vehicles make audacious claims to horsepower (up to 1,000 hp) and range (over 300 miles) that should attract some of the same buyers that snapped up the original gas-guzzling versions.

Both companies are seeking to electrify their brands to jolt them back to life. DeLorean has the steeper road to climb, but their brand has always been seen as futuristic, which is ideal for the burgeoning electric car market. GM, though, is in a much better position to succeed with their brand renaissance because they already have the factories and the dealerships in place. (DeLorean has neither.) But the Hummer brand has always been more about brawn than hi-tech, so it will be interesting to watch the transformation. Maybe Saab or even the Edsel brand will be brought out of moth balls and given an electric makeover.

Maybe not. But at least with DeLorean and Hummer it shows that in some cases, old brands never die, they just wait to be recharged.