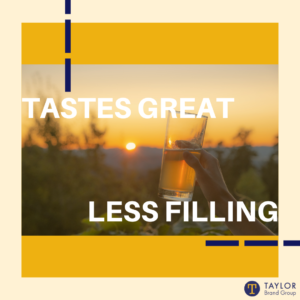 In the mid-1970s, Miller Brewing Company introduced a new kind of beer, Miller Lite, which had fewer calories than regular beer. Of course, they were loath to position it as a diet product and instead focused their messaging on being less filling, using the now classic tagline, “Everything you’ve always wanted in a beer…and less.” Out of concern that fewer calories meant a weaker flavor, they added copy about great taste. Within a short time, they had summed up their product’s two key attributes in four words: “Tastes great. Less filling.” Soon after that, they hit on a brilliant strategy for drilling home this concise brand messaging and that was to have loyalists to the brand take sides. In a series of TV spots, Miller Lite drinkers would argue over which one was better, “Tastes great” or “Less filling.” It was a classic case of comparing your brand to itself and the approach helped Miller Lite eventually reach the number two market share slot behind the king of beers (at the time), Budweiser.

If you are a leading brand, and sometimes even if you’re not, comparing your product to a competitor’s can backfire by bringing them more attention and awareness than they might otherwise have had. People may want to decide for themselves that your brand is stronger, tastier, more fashionable, etc. than the other brand. But comparing your brand to itself, often in a humorous way, can be a great way to keep the debate in-house.

More recently, Twix and Coke Zero have been doing just that. Twix is a chocolate candy bar that comes in two sticks. They have created a faux debate over which side is better—left Twix or right Twix. With tongue firmly planted in cheek they have portrayed separate factories for their left and right versions with each trying to outdo the other. Of course, they are exactly the same, but their manufactured argument reinforces the brand effectively.

Now Coke Zero Sugar has begun a self-comparison campaign by asking the question, “Is Coke Zero Sugar the greatest Coke ever?” Not unlike Miller Lite, Coke is attempting to carve out a niche for Coke Zero that is between Coke and Diet Coke. And not unlike Twix, the Coca-Cola Company doesn’t care which Coke you think is the greatest ever as long as you’re drinking one of them.

So why have the campaign at all, you might ask? Two reasons: One, sales of regular sugar Coke have been slipping for many years as people shift to lower-calorie or no-calorie drinks. (Since 2000, per capita consumption of soft drinks has decreased by 25 percent, according to Statista.com) The second reason is that this campaign for Coke Zero is really about gaining trial from non-Coke Zero drinkers. They could be drinking another Coke product right now, but more likely they are not. Coke Zero is really using the comparison to entice new users. One of their TV spots even uses the line “Yes? No? I’ll have to try it first.”

Ironically, Coke Zero’s clever campaign could probably use a tagline like “Tastes great. Less filling.” But that line was taken long ago by one of the first brands to compare itself to, well, itself.