Home > Services > Articles & White Papers > Papa John’s: Evolving the brand away from the person, but keeping the name 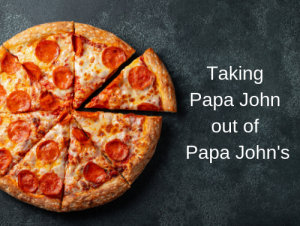 Being the top executive of your company and the front man for the brand at the same time is always a risky proposition. A CEO has to make unpopular decisions at times and his business priorities may not fit perfectly with the demands of being the face of the brand. Every statement is highly scrutinized and mistakes, big and small, can weigh heavily on public perception.

Papa John’s founder John Schnatter served for years as a likable pitchman for the growing pizza brand that challenged Pizza Hut and Domino’s for significant share of the take-out and delivery pizza market. Though he shared the spotlight with the likes of Peyton Manning and others, Schnatter was the center of the brand’s messaging for more than a decade as it grew to national prominence.

Unfortunately, Schnatter proved to be a public relations nightmare for his company as well, wading into political issues including health care and NFL players kneeling for the national anthem. When his commentary took a turn toward racism with the use of the N-word, he was soon ousted from his executive roles. The company then began playing defense against what once had been its greatest branding asset.

Now the brand faces the most delicate of balancing acts—keep the brand name, but get rid of the guy it’s named after. Anything this complicated requires a strategic process, and the brand started out correctly by first accepting blame for the situation. In one ad in the fall of 2018, they acknowledged the criticism of the company saying, “You expected better from Papa John’s. So did we. Thank you for your anger … criticism … honesty. It is making us better.”

Subsequent advertising tried a short-lived tactic of diluting the power of the name “John” by suggesting that the company was made up of many people. “You’ve heard one voice of Papa John’s for a long time,” an employee said in a TV spot, “It’s time you heard from all of us.” At the end of the spot, a list of alternative names rolled by including Papa Kiersten’s, Papa Brant’s and Papa Daniel’s.

Of course, a litany of alternative names to replace the bad actor isn’t a long-term strategy, it just serves to begin redefining that when they say, “Papa John,” they don’t mean that “Papa John.” (One subtle move by the company has been to register the trademark without the apostrophe in “John’s.”)

In April, the brand made a big step toward demonstrating their commitment to inclusiveness by naming Shaquille O’Neal, who is African-American, to their board of directors. The company also signed him to a three-year contract as a brand ambassador and an investor in nine store locations. The popular “Shaq” is a seasoned pitchman and has a Q Score that is at the top of the charts. It’s a wise strategy for Papa John’s to make such an overt choice for a new face of the brand.

So the process rolls on. Sales were down before Schnatter’s racist statements became public, and the brand continues to attempt to rebuild lost market share. It is slowly putting distance between itself and its founder. The high-wire act of “keep-the-name-but-lose-the-namesake” continues. Shaq is likely part of the solution, but there’s a long way to go take the Papa John out of Papa John’s.