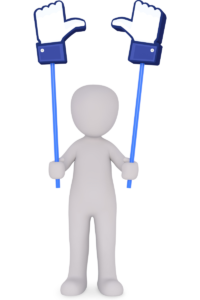 First let me give you a big thumbs up and smiley face emoji for the incredible job you’ve done with Facebook and for leading the way in shaping the world of social media. With more than two billion users globally you’ve created one of the world’s most valuable brands in just 15 years. People are more connected and more knowledgeable about the lives of their families, friends, friends of friends, and many others who keep their profiles open for all to see. In the process you have built an incredible advertising platform that allows marketers to precisely target their audiences based on the information they have revealed about themselves online. Sure beats the old days of buying a bunch radio and TV spots and hoping for the best!  So, two more thumbs up and a party hat emoji for that as well.

Who could have imagined such a vision of a global brand when you first stole—I mean “adapted”—the concept from the Winklevoss twins at Harvard in 2006? But based on the number of times I’ve seen you speaking to congressional hearings lately, I’m guessing you’re learning that being global and dominating is a double-edged sword.

I’d give you a thumbs down right now, but that doesn’t exist in the good vibes world of Facebook, so I’ll just say that I think your brand is at a major crossroads. For all the good Facebook has done, there are serious questions about how you are dealing with certain issues. Like privacy. And fake news. And election manipulation. And hate speech.

Look, I’ll be the first to admit that I can’t even spell algorithm without help from spellcheck, so when Facebook suggests that I might be interested in this profile or that, I’ll probably check it out. But thanks to a whistleblower we now know that your own internal investigations have shown how that same algorithm can rapidly expose your loyal users to some pretty nasty stuff that may or may not be truthful and can fan the flames of racism and hatred. And yet you have done little to counteract these problems.

Would it be fair to say that with great success comes great responsibilities? I think so. What Facebook is being asked to do is no different from car makers being told to make their cars safer to drive and better for the environment. It may cost money and affect earnings, but you can afford it.

I also should add that announcing a new parent brand, Meta, was poorly timed. It smacked of a “Pay no attention to the man behind the curtain” kind of distraction from the very serious questions about your social network that have been dominating the news of late. Either that or it said that it’s business as usual at Facebook as you announced your vision for a “metaverse” in the midst of social media “verse” we are questioning already.

I know you’re used to being the smartest person in the room, and if I were there it wouldn’t change a thing, but the Facebook brand is taking some serious hits. It needs changes for the good of your company and for society. I’m hoping you can devote some of your time to solving these problems, because if you were unable or, even worse, unwilling, well, that would really Zuck.