Home > Services > Articles & White Papers > Will the Armstrong Flooring brand survive Chapter 11? That may be all that does. 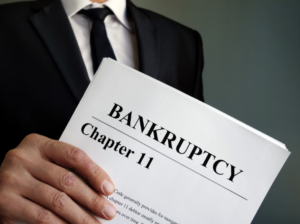 Like an aging heavyweight boxer on his way to a final defeat, Armstrong Flooring may have taken too many body blows to ever hope to be victorious, unless they can land one last lucky punch. The venerable flooring products brand, headquartered in Lancaster, PA for more than 100 years, filed for Chapter 11 bankruptcy protection on May 9th. Having actively sought a buyer or merger for some months, they ran out of money and time. What will happen to the company, its employees, and its brand is anyone’s guess, but there is certain to be drastic change.

For some observers, this is déjà vu all over again as Armstrong World Industries, a predecessor to Armstrong Flooring, filed Chapter 11 in December 2000, due to overwhelming liabilities from asbestos lawsuits. Emerging from bankruptcy in 2006, Armstrong World Industries regained some of its past glory as an industry leader in flooring products for commercial and residential use. Its ceiling business experienced substantial growth and profitability. Sales reached $2.8 billion in 2009. But all was not well.

In 2016, the company made what may now be seen as a fateful decision to split off the floor products brand as an entirely separate entity, Armstrong Flooring. The more profitable Armstrong World Industries retained its name and announced that they would be focusing on the commercial ceilings business. This left two Armstrong brands competing in largely separate markets, but with the same name and heritage.

From that point on, Armstrong Flooring struggled to be profitable, facing production issues, rising materials costs, and stiff competition. They sold off their wood flooring business in 2018. The once dominant brand lost distribution, and ultimately brand recognition, from its target markets. In 2021, sales were in the $600 million range, but they reported a loss of $53 million.

So now the question really becomes, what is the Armstrong Flooring brand worth? The company has other hard assets it can liquidate, if necessary. It owns several manufacturing plants and some other real estate. These assets can be appraised and a clear value established. But the value of the brand is tricky.

The story of Circuit City, the once leading electronics retailer, offers some dark possibilities. By the mid-2000s, Circuit City was a darling of Wall Street, with dynamic growth and profitability. In April of 2008, Blockbuster (yes, that Blockbuster) offered a billion dollars for the company. That bid stalled and by the end of the year Circuit City was in Chapter 11. By March of 2009 they were out of business entirely. A company named Systemax bought the brand name, trademarks, and website for just $14 million.

Incredibly, the once mighty retailer went from billion-dollar baby to has-been brand in less than a year. While the website still exists and sells electronics online to this day, the brand is largely forgotten. The Armstrong brand won’t face this anonymity anytime soon because the World Industries side is doing just fine, thank you. But the Armstrong Flooring name is far more likely to lose its brand power. The best hope for survival of the brand is likely to have another flooring company acquire it and integrate it into their stable of offerings. This may also be the best hope for Armstrong Flooring’s creditors to get some value for the company’s assets. So, what’s the Armstrong flooring brand worth? We will soon see, but barring a lucky punch, it should be something more than $14 million, but well short of a billion dollars.